Another Revelation Software User’s Conference has come and gone, and the 2010 version of this meeting may have contained the best content ever. From April 27th through the 30th nearly one hundred Revelation users, developers, vendors, and resellers converged on the Rio All-Suites Hotel in Las Vegas for training, networking, and learning about the newest releases from Revelation Software.

The conference began with a cocktail reception at the VooDoo lounge on the roof of the Rio where despite high winds, a number of the attendees enjoyed drinks and spectacular views of the Las Vegas strip, and the natural beauty of the surrounding mountains.

On Wednesday morning, after a breakfast sponsored by Sprezzatura LTD, the conference began in earnest with Mike Ruane, President and CEO of Revelation Software giving a ‘State of the Company’ address, and where he also thanked the attendees for coming to the conference. In Mike’s opinion, he believes that the economy is neither as bad as the papers make it out to be, nor as good as Wall Street seems to think it is, but it is getting better, and that the Revelation developers and users have survived nicely. Mike was followed by the Keynote speaker, Tom Wilson, publisher of Database Trends and Applications magazine, and President of Unisphere media. Tom offered the audience his views of trends in the IT industry, including virtualization, and how the Revelation Community could take advantage of these trends. Mike returned to the podium to give some further information about the conference schedule, some last minute schedule changes, and then the attendees were off to the breakout sessions.

Over the course of the next two and a half days there were twenty different sessions that the attendees could attend. First out of the gate was Jared Bratu of Revelation Software with a talk entitled ‘A Practical Guide to Application Performance’. Appearing in a session opposite him was Mike Ruane discussing the SQL Connector technologies in OpenInsight. The SQL Connector allows OpenInsight applications to work with SQL data with no changes to the OpenInsight application, and is included in OpenInsight 9.2 and above.

After a break for a lunch that was a tasty Mexican buffet, the sessions continued with Kevin Fournier from SRP Computer Solutions and a presentation entitled ‘Designer’s Challenge Pluggable and Extensible Software Using SOA Techniques’, and Erik Smith of Revelation Software with a talk entitled ‘Five Concepts an OpenInsight Developer Should Never Forget’. These were followed by a presentation by Mary Jean Blink of VSI Technologies called ‘Blended Learning Training’, and a second talk by Jared Bratu entitled ‘Extend your Applications to Remote Desktops’.

After an Ice Cream snack sponsored by WinWin Solutions Inc. , the final talks of the first day of the conference were given: ‘OpenInsight and MS Office Interaction’ by Sean FitzSimons of Revelation Software, and ‘Securing OpenInsight’ by Dr. John Stamper of VSI Technologies. A little while later the attendees had a ‘Dinner and A Show’ evening: dinner was served, and then we walked over to the Penn and Teller Theater, to see Penn & Teller. The show was great, with cool magic, fun tricks and lots of laughs, and a good time was had by all. During the show it was discovered that Heidi Korell of NEI Global Relocation was hiding a cell phone hidden in a fish and didn’t even know she had done it. Penn & Teller are exceptionally clever.

Thursday morning started with a breakfast sponsored by SRP Computer Solutions. The first talks of the day were by Carl Pates of Sprezzatura LTD and his presentation entitled “The WebBrowser Control: Extending Your OI Forms with Embedded HTML” and a presentation by Paul Simonsen and Jason Green of SRP Computer Solutions named “Designer's Challenge: Web-Based Applications Using Drupal and OpenInsight”. These were followed by Mike Ruane and a presentation named ‘OpenInsight 9.2 Features and Functionality: An Overview’, and a talk entitled “Power Reporting with TCL” by David Goddard , which by all reports was the most spirited discussion during the entire conference, with user asking lots of questions, and requesting enhancements and new features.

The attendees had another great lunch, this time an Italian buffet, and the afternoon sessions then began. Bob Carten of Revelation Software began the afternoon with “The Collective Application (or) Everything is Supposed to be Interconnected, But How Do I Do That?”, and at the same time Don Bakke, President of SRP Computer Solutions gave a presentation entitled “Designer's Challenge: Preparing Applications for the Future Using MVC Concepts”, in which he explained the Model View Controller theory and how OpenInsight developers can make use of it. The next set of talks were by Michael Byrne of Rocket Software and his talk called ‘The Power of U2 with OI”, and Mary Jean Blink of VSI Technologies along with Bob Cloney of Elite Spice gave a joint presentation named ‘Virtual Server Solutions’. After a snack break sponsored by Sprezzatura, the last two sessions of the day were given: ‘Migrating Legacy Applications to the Web’ by Rick Weiser of DesignBais, and ‘TigerLogic D3- The Next Generation’ by John Bramley of TigerLogic. Both Rocket Software’s U2 and TigerLogic’s D3 products can be used by OpenInsight as a native data source with the Connector Technology built into OpenInsight 9.2.

Later that evening, the Vendor Fair and Exhibition was held in one of our meeting rooms. The companies exhibiting included –DesignBais, Developers from DownUnder, ITMS , MVP Software, SRP Computer Systems, Sprezzatura LTD, TigerLogic, VSI Technologies and WinWin Solutions Inc. The folks who attended the Vendor Fair were able to enjoy a drink, some hors d'oeuvres, and spend a more relaxed amount of one-on-one time with the vendors. The attendees seemed satisfied and happy with the answers they received, and the exhibitors seemed pleased with the questions they were asked. A boarding pass printing station at the exhibit was sponsored by Sprezzatura.

The final day of the conference, Friday, started with a breakfast sponsored by WinWin Solutions. The first session of the day were “Designer's Challenge: Web Based Applications Using Adobe Flex and OpenInsight” by Clay Borne of CLB IT, and “An Introduction to OpenInsight for Web (O4W)” by Bob Catalano of Revelation Software. The final two sessions of the conference were from Andrew McAuley, Managing Director of Sprezzatura LTD with “Troubleshooting OpenInsight Applications- the Logging Approach”, and from Bryan Shumsky of Revelation Software “Developing Complex Web 2.0 Applications Using O4W”, part two of a two-part O4W combo. 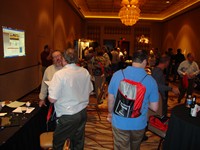 Finally, Mike Ruane gave his closing remarks, thanking the attendees for coming, thanking the presenters and exhibitors and vendors, and discussing some plans for the next conference. A plan of software releases was outlined, including the OpenInsight 9.2 release within the next two months, and a 64-bit version of OpenInsight, version 10.0, scheduled for release in the second quarter of 2011. Also, the next Revelation Software User’s Conference was tentatively scheduled for October 2011.

During the closing remarks there were two prize drawings. TigerLogic held a raffle for an Apple iPod, and with Janet Cioffi-Kennedy of TigerLogic holding the bag full of entrants’ names, and Nancy Ruane of Revelation Software pulling the winner’s name: Jim Vaughan of Waterloo Software. Revelation Software also held a drawing for an Asus Netbook computer. Janet picked the winner’s name at random, and the winner was Todd Carter of Electronic Registry Systems.

The 2010 Revelation Software User’s Conference was an unqualified success. A number of attendees commented that this was the best trade show they had ever attended. The Revelation staff received a number of comments and suggestions regarding the next versions of OpenInsight and the Network Products, the attendees were able to learn about the current and next releases of OpenInsight, and they were able to talk and exchange ideas with other Revelation users and developers. Most of the attendees plan to be at the 2011 conference – we hope to see you there as well.