What a Show!
The 2007 Revelation Software User’s Conference in Seattle this past January 29th through February 2nd was quite possibly the best conference in Revelation’s history. Over 140 attendees and guests spent three days learning tips and techniques, meeting with friends and colleagues, getting solutions for their problems, and enjoying themselves while they were doing it.

The conference started off on Tuesday night with a Cocktail Reception. It was a chance for attendees to meet up with old friends, meet people face to face that they’ve known for years via email or the web, and talk about happenings in general. A Special Guest who showed up was none other than Breanna Anderson, one of the original designers and architects of OpenInsight and OpenEngine. Breanna brought her copies of Serial Number 0001 of both of these products. 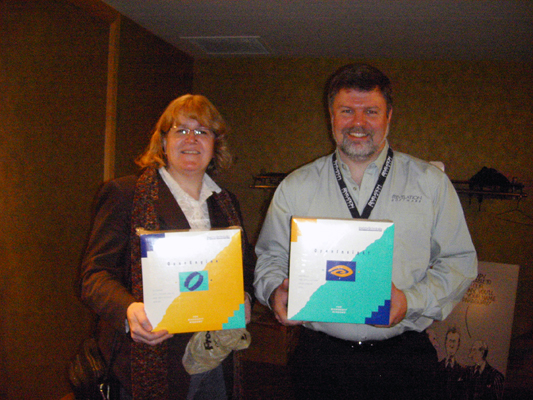 Breanna Anderson and Mike Ruane with the First OpenInsight and OpenEngine

The real business of the conference began on Wednesday morning. After a breakfast that was sponsored by VSI Technologies, opening remarks were made by Mike Ruane, President and CEO of Revelation. Mike provided a quick recap of what had happened with Revelation and its products since the last conference, including new product releases, client meetings and shows. He then laid out the plans for the company and products for the next three years. 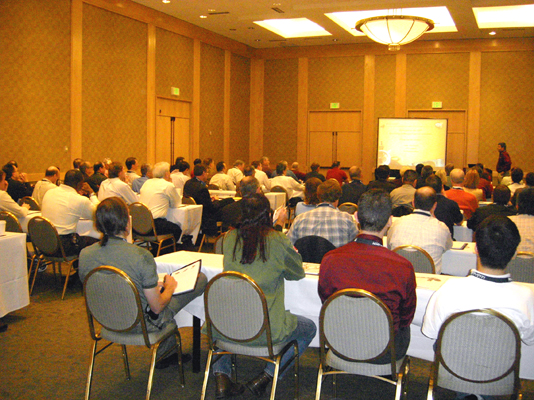 Next, our keynote speaker, Ms. Susie Siegesmund, Director of IBM’s U2 Data Services, dazzled the attendees. Her talk, entitled ‘The Future of MultiValue Technology: An IBM Perspective’, offered the attendees an insiders view of how IBM, the world’s largest computer company, feels about our particular technology sector. Her final words: ‘The future looks bright’. She also recommended that we, as MultiValue developers, become evangelists regarding our products. We should follow her advice. 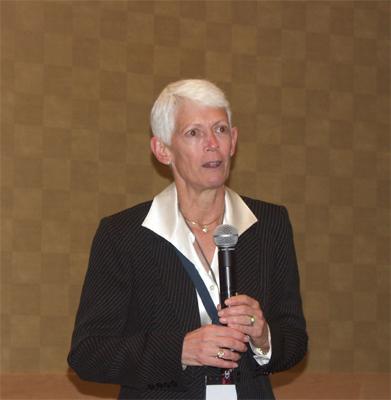 Susie Siegesmund of IBM with her Keynote

The general sessions began next, following a format of two different sessions going on at the same time. The sessions started with ‘AJAX and OpenInsight’ by Sean FitzSimons of Revelation Software, and ‘Patterns, Objects, and Productivity – Managing Complexity in Application Development’ by John Henry of J.C. Henry and Co.

After the first sessions, we had our first lunch, sponsored by SRP Computer Solutions. A surprise was in store when it was announced that under a lucky attendee’s seat was a card. The lucky winner of an iPod Nano was Steve Botes of Retailware. After lunch, sessions began with ‘Introducing OpenInsight’s New Banded Report Writer’ by Bill Reynaldos of Revelation Software and ‘Exploiting System Tables’ by John Stamper of VSI. Another set of sessions followed, with ‘Windows Common Controls and OpenInsight’ by Carl Pates of Sprezzatura Group, and then ‘How Open is OpenInsight? Connecting Our Database to Other Technologies’ by Kevin Fournier of SRP.

The attendees were then in for a treat, with an afternoon snack sponsored by DBTA magazine. Another set of sessions then followed, with ‘Migrating Legacy Applications to the Web’ by Rick Wieser of DesignBais and ‘Outing the Application: A Practical Guide to OpenInsight’s Deployment Runtime Tools and Beyond’ by Richard Bright of Bright Ideas. The first day ended with three hours of exhibitions at the Vendor Fair. Fifteen exhibitors were showing their Revelation-based wares, including Via Systems, Freedombase, and MITS. A rousing success, vendors were busy for the duration of the fair. Attendees were given passports with empty spaces for each of the vendors. As attendees visited the vendors, they were given a sticker with the vendor’s logo. When all the spaces on the passport were filled up, the passport was handed in for a later prize drawing. 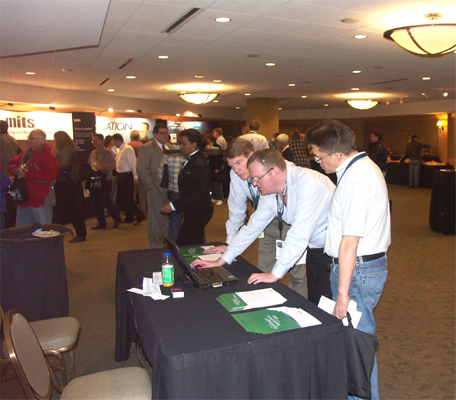 Thursday started with a breakfast sponsored by MITS. The first sessions were ‘Event Chain Reaction: Combining Promoted Events and Commuter Modules’ by Don Bakke of SRP, and ‘Is There Gold in OIL?’ by Bob Carten of Revelation Software. These sessions, as well as all the other sessions during the conference, were very well attended. The next two sessions were ‘OpenInsight 8.0 – Feature Overview and Demonstration’ by Mike Ruane of Revelation Software, and ‘Linear Rehashed: Inside OpenInsight’s Filing System ’ by Aaron Kaplan of Sprezzatura. A tasty lunch, sponsored by Sprezzatura, followed with miniature ‘Sprezzatura’ emblazoned USB Optical Mice at everyone’s seat.

The afternoon sessions began, starting with ‘Drag and Drop: An Insider’s View’ by Andrew McAuley of Sprezzatura and ‘Analytical Reporting for OpenInsight with MITS Discover’ by Fred Owen. These sessions were followed by ‘Using MFSs to Enhance Applications and the Power of Transaction Processing’ by Mary Jean Blink of VSI Technologies and ‘Features and Futures: Why OpenInsight Customers Will Love UniVerse’ by Jackie Burhans of IBM. A tasty snack sponsored by International Spectrum magazine was provided, and then it was back to the sessions again. First up was ‘Business Intelligence – Visualizing Your Data’ by Greg Helland of BleuPelikan and ‘Porting OpenInsight Applications to the Web Using Freedombase’ by Glenn Groves of Freedomsoft. The final two sessions of a very full day were ‘Introduction to IBM U2’ by Adam Van Beek of IBM and ‘Creating Distributed Systems with OpenInsight’ by Bryan Shumsky of Revelation Software.

Thursday wrapped up with a very informal dinner, where the attendees were encouraged to wear their favorite ‘Slogan’ tee-shirts. This was a real fun event, with a number of attendees changing shirts multiple times. If one looked closely, they could see that Bob Orsini was in the zone while listening the jazz quartet. After the dinner ended, a number of the attendees were reportedly seen in the hotel bar, and a few even showed up the next morning still wearing the clothes they had been wearing the day before. Hmmm… 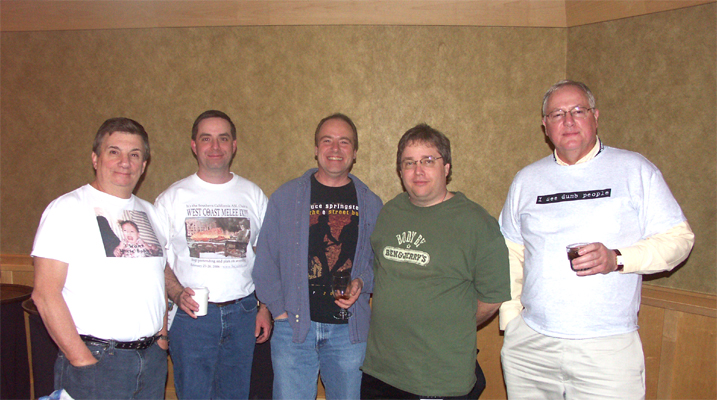 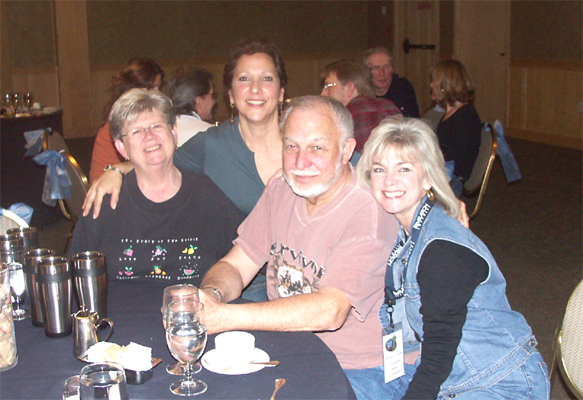 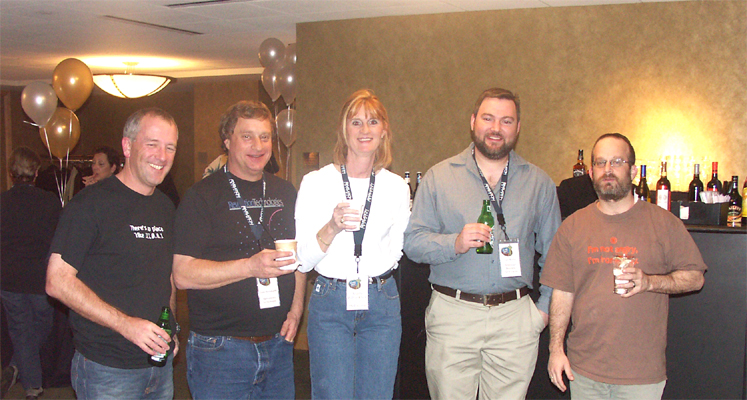 The final day of the conference began with a continental breakfast sponsored by WinWin Solutions, Inc. The sessions began with ‘OpenInsight’s OEngineServer and the Technologies That Interface With It’ by Bob Catalano of Revelation Software, and ‘OECGI for Dummies – Bringing OpenInsight to the Web’ by Paul Simonsen of SRP. The final two sessions were ‘Porting Your Arev Application to OpenInsight Using the Arev32 Interface’ by Bob Orsini of Revelation Software, and ‘myViewpoint – Business and Sales Intelligence for the MultiValue Manager’ by Mike Hannigan of Via Systems.

Mike Ruane closed the conference with a few remarks, including some assurances that the IBM partnership will benefit the Revelation community. A number of prizes were given out during the closing remarks as well - nine attendees were awarded prizes for clever or funny tee shirts from Thursday evening’s dinner. Winners included Stacy Mecklenberg, Jim Vaughn, Paul Simonsen, Susan Martin, Kathy Woolverton, Todd Carter, John Henry, Karlyn Bunting, Matthew Jones and Kevin Fournier. The prizes were polar fleece pullovers provided by Dave and Vickie Sigafoos of SigSolutions, Inc.

Random names were drawn from the completed passports that were handed in from the Vendor Fair. Richard Bright won Tully’s Coffee, Angela Black, Karlyn Bunting, and Kathy Harmacek each won Starbuck’s Gift Cards, and Clay Borne won an iPod. VSI Technologies, Via Systems, and SRP Computer Solutions each gave away their own prizes.

Before the attendees left the room with their own conference tee shirts and proceedings CD, it was announced that the next conference would be in Las Vegas, sometime in 2008. We look forward to seeing you there!