Another LinuxWorld show has come and gone, and Revelation Software was there again showing the power and flexibility of OpenInsight for Linux. From August 9th through 11th, 2005, thousands of attendees were at the LinuxWorld conference held at the Moscone Center in San Francisco, California.

Revelation Software attends and exhibits at shows like these for a few reasons: first, to attract new developers and show them what a powerful and flexible development tool OpenInsight is; and second, to show our existing clients with OpenInsight-based applications that they in fact can have Linux versions of their applications. And since the Linux marketplace is growing, and the number of Linux-based applications is growing, there is no better time than the present to port their systems to Linux.

The show began on Tuesday morning with a flurry of activity as the vendors all prepared their speeches and demonstrations. Mike Ruane, President of Revelation Software, and Bob Carten, Senior Developer, were manning the booth for Revelation. We had a special guest, Greg Helland of Bleu Pelikan (www.bleupelikan.com), one of our premier West Coast resellers. All were busy giving demonstrations to interested attendees. 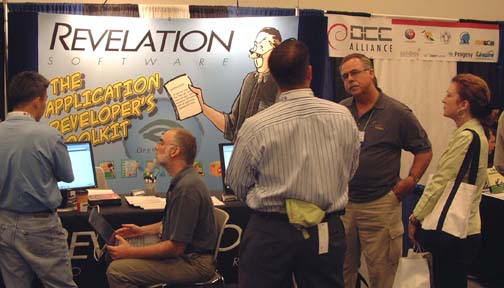 Bob Carten and Greg Helland chat up the crowds.

Bob Carten demonstrates OIL to John May from DDE (center), a current Revelation user, and a former user on the right.

Next to our booth was one sponsored by the DCC (Debian Common Core) Alliance, a diverse group of Linux vendors and nonprofits with strong Debian ties that have partnered to assemble a common, standards-based core for Debian-based distributions. We had numerous discussions with the various members of the alliance, such as Linspire and Xandros, about making available versions of OpenInsight for Linux (OIL) to their customers. Watch our website for more information in the upcoming weeks and months. 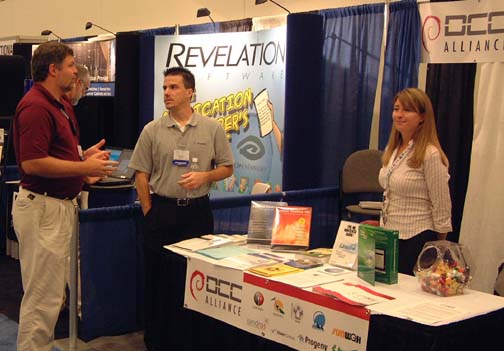 It was a very successful show from Revelation’s point of view. We had numerous user and former users of Revelation products show up, including one who stated “Revelation? I can’t believe you guys are still around. I made so much money with you!” As more and more businesses decide that Linux is no longer just for the stereotypical long haired, pony-tailed geek in a garage, they are now looking for solutions to their business needs. And since OpenInsight for Linux (OIL) lets a developer backup up their windows-based systems and restore them on Linux, all developers of windows-based OpenInsight solutions now have Linux-based solutions. It’s time to get them out into the Linux world, so let’s go guys!