On February 15 through 17 of this year, Revelation Software was an exhibitor at the LinuxWorld conference and exposition at Boston’s Hynes Convention Center. With thousands of attendees, the event was quite a hit.

Revelation Software was there showcasing OIL, OpenInsight for Linux version 7.1. OIL is a fully functional, Rapid Application Development tool with its own graphical development environment and integrated database. There are no comparable products to it in the Linux world!

Over 130 attendees stopped by the Revelation booth where demonstrations of making tables, data entry forms, and reports were given. OIL generates all of its printed output in PostScript, the de-facto standard for output in Linux, allowing both users and developers tremendous flexibility in their output needs.

OpenInsight for Linux runs on Fedora Core, Red Hat, Debian, Mandrake, SuSE, and Xandros distributions of Linux. While at the show demonstrations were being given on a Dell laptop running Xandros Deluxe 3.0, and it ran very well. In fact, members of the Xandros development team attending the show stopped by to see OIL running on their product. 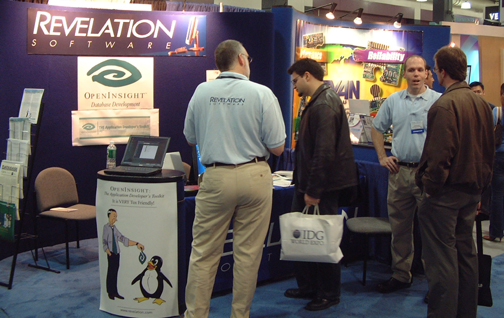 All in all it was a great show. A number of former Windows developers, looking for solutions and development tools similar to what they were used to in the Microsoft world were very excited about Revelation’s product offerings. Many evaluation copies of OpenInsight were distributed to Linux application developers. We also had a number of former and current Revelation developers stop by the booth, including Ira Krakow, Dave Harmacek, John Bouley, as well as our friends from the Massachusetts Commission for the Blind.

For the Digital Camera drawing held for the Revelation Software booth, the winner was Normand Leblanc of Windwood Consulting Services, Newton Mass. May he enjoy using it.

Revelation Software will be exhibiting at the LinuxWorld show in San Francisco in August of this year, as well as the Boston conference in 2006. We hope to see you there!