On June 23rd through 26th over 125 Revelation developers, users, and partners attended the 2004 Revelation Software User’s Conference at the Astor Crowne Plaza Hotel in the Big Easy, New Orleans, Louisiana.

The festivities began on the night of Wednesday June 23rd, when a welcome reception for those attendees staying in the hotel was held. Over traditional New Orleans’ hurricanes in commemorative Revelation hurricane glasses, the attendees were able to hook up and reminisce with old acquaintances, meet new friends, and discuss the agenda for the upcoming conference. During the reception attendees also received strings of beads- the ‘coin of the realm’ for Bourbon street- and later that night there were some reports of heated negotiations going on between our attendees and denizens of the Bourbon Street balconies. 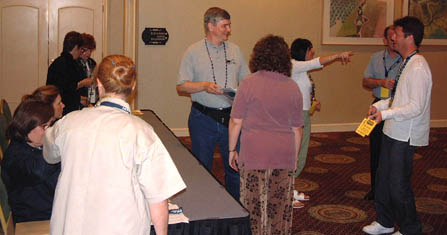 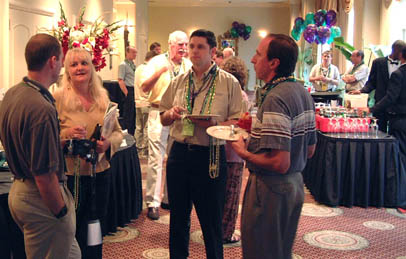 More shots of the Welcome Reception 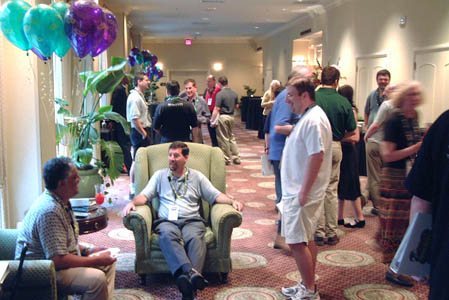 The conference began in earnest Thursday morning with a continental breakfast during registration. Mike Ruane, president of Revelation Software, opened the conference with welcome remarks reviewing the current state of Revelation Software as a company, changes and updates to the company and community since the last conference, and future development plans. During these remarks it was disclosed that Revelation had sold over 50,000 user seats since August 1st, 2002, had an increase in the number of developers by a factor of 30%, and had recently gotten OpenInsight 7.0 and the Universal Driver Verified for Windows 2003 Server by Microsoft. Mr. Ruane also laid out plans for expansion of the user and developer base, with specific items that can be addressed by Revelation Software itself, its resellers, and independent consultants. There was then a multimedia presentation that lasted for about thirty minutes, covering some of the highlights of Revelation’s activities since the last conference was held in 2002 in Las Vegas.

At this point the breakout session began, with sessions from Bob Carten of Revelation Software, Chuck Barouch of Mount Olympus Systems, and David Sigafoos of Sig Solutions. Next came lunch, which was generously sponsored by the Sprezzatura Group. Andrew McAuley, Managing Director of Sprezzatura, gave a brief speech thanking the attendees for coming and Revelation Software for holding the conference, and then wished all the attendees a good conference. 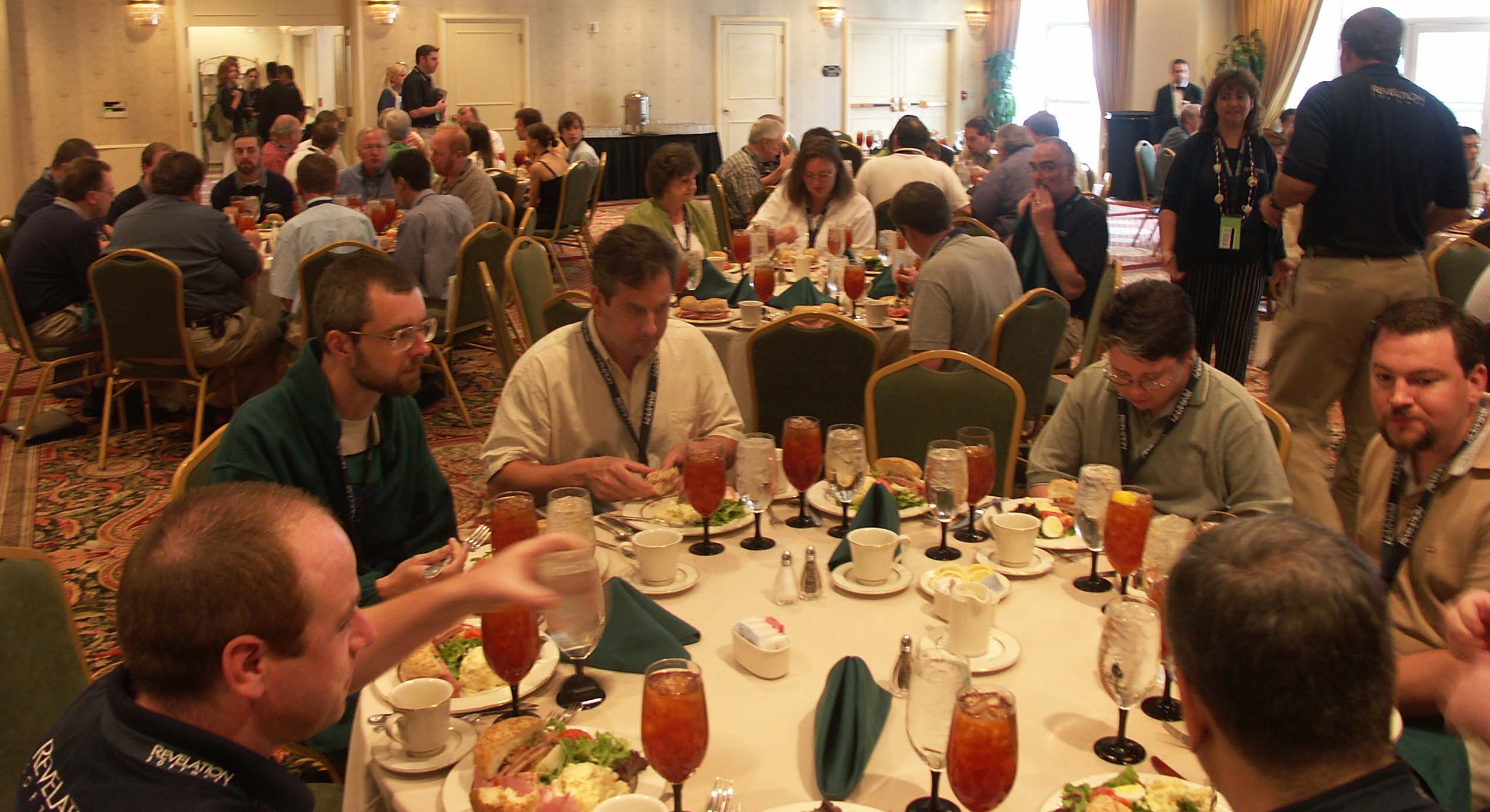 Diners at the Sprezzatura sponsored lunch

After lunch there were more breakout sessions, first by Kevin Fournier or SRP Computer Solutions, Sean FitzSimons of Revelation Software, and Richard Bright of BrightIdeas. After an afternoon snack of chips, cookies, and/or ice cream, the final sessions of the day were begun with talks by David Goddard of Revelation Software Pty Ltd (Australia), and Aaron Kaplan of the Sprezzatura Group. Aside from one of the LCD projectors deciding to begin to fade out during one of the presentations, the day had gone very well.

That evening, the Vendor Fair and Reception was held. Booths from many of the Revelation world’s best companies were active and filled during the evening. Exhibitors included VSI Technologies, Alternative Systems, Sprezzatura, Revelation Software, WinWin Solutions, International Spectrum, SRP Computer Solutions, J.C. Henry and Co., Zadec, Mount Olympus Systems, 3D Tek, and MegaMation. All were showing their latest wares and services. The rain on Bourbon Street that night did nothing to dampen the spirits of the attendees, who were wowed with demonstrations and giveaways. Although not exhibiting at the conference, Lindows Inc. provided three full copies of Linspire, a powerful Linux distribution to give away as door prizes, and they were won by Charles DeHaas, Jeff Goodwin, and Gerald Lovel. 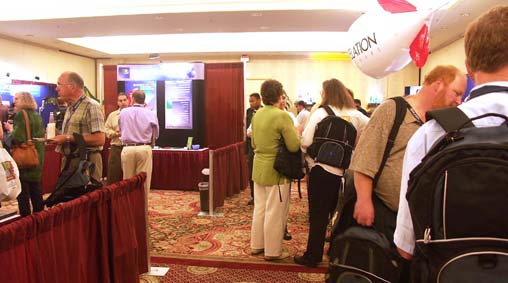 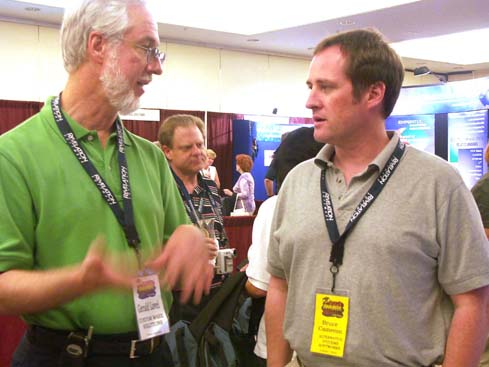 Gerald Lovel and Bruce Cameron. Byron Shindler in the background 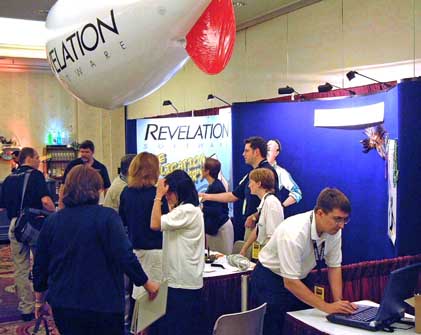 More crowds at the Vendor Fair

Friday began with a continental breakfast and lots of coffee for those who had stayed out too late the night before. The breakout sessions of the day began with Mike Ruane of Revelation Software, Don Bakke of SRP Computer Solutions, and Hank Huizinga of Megamation. Mike Ruane was showing off the latest progress in the next release of OpenInsight, version 7.1, due out later this year. Attendees saw the sneak preview, and offered some suggestions that will be included in the release. The next batch of sessions were run by Kevin Ruane of Revelation Software, Lovina Schoenmakers of LES systems, and Carl Pates of Sprezzatura. Lunch was next with roundtables devoted to some of the hotter topics in the Revelation community- OpenInsight on the Web, Network products, OIPI, the SPP Program, plus many others.

Afternoon sessions then began with presentation from John Henry of J.C. Henry and Co., Mike Ruane of Revelation Software, and Mary Jean Blink of VSI Technologies. After another scrumptious snack break, the final sessions of the day were presented by Andrew McAuley of Sprezzatura, Michael Pellegrino of Casalle and Pellegrino, and Bob Orsini of Revelation Software.

That evening the gala event of the conference was held- the Mardi Gras Ball. With every attendee wearing a hat, or maybe even a mask or feathers, great food, an open bar, and fantastic music by the band The Flavors of Louisiana, a great time was had by all. By the end of the party the weather had cleared, and loaded with beads and balloons, our band of intrepid attendees went out that evening and brought Bourbon Street to its knees. (Well, if not to its knees, they did jostle it a bit!). 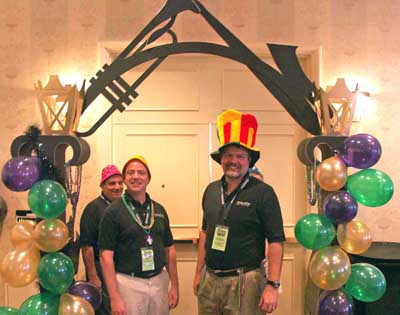 Bob Orsini, Sean FitzSimons, and Mike Ruane get ready to meet the crowds 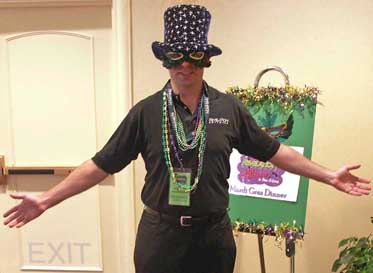 Who is this masked man? 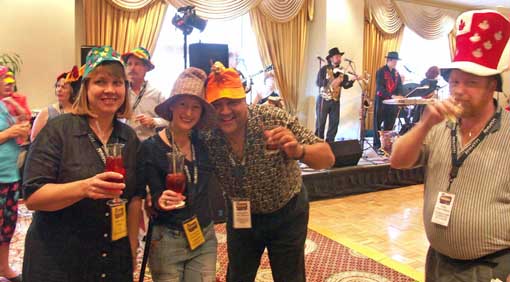 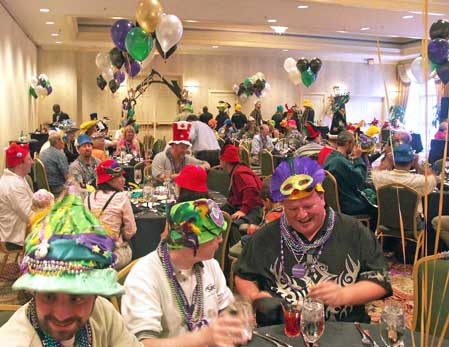 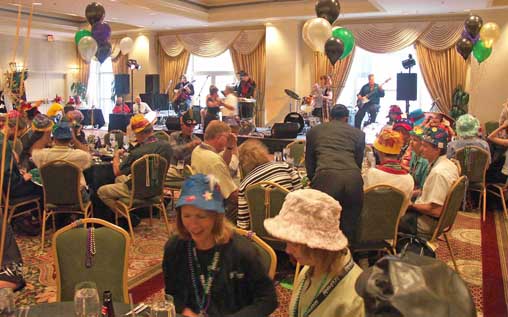 The band was rockin’- Blues, Jazz, Zydeco- you name it 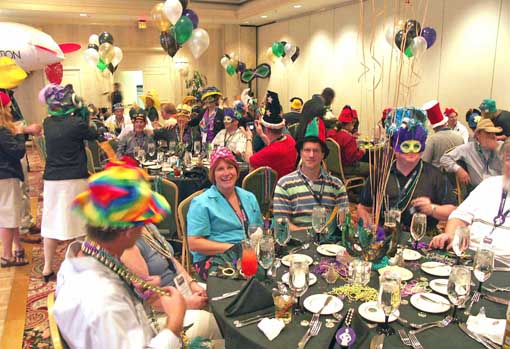 More shots of the party 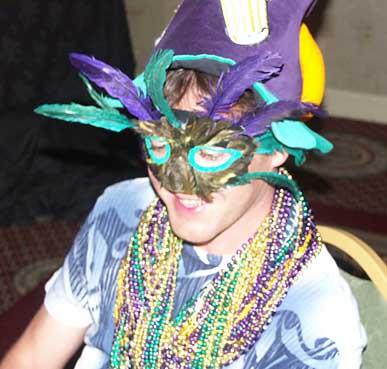 Another masked man- but we know who he is!

Saturday morning started too early for many peoples’ tastes. People were drinking the coffee like it was going out of style, and somehow it didn’t seem hot enough. There were whispers among the attendees that there were a few of their compatriots who may have had too good of a time the night before, and that there were photographs to prove it. At this time, we can neither confirm nor deny the existence of these photos. After the last breakout sessions were given by John Stamper of VSI Technologies, and David Pociu of the Insitech Group, Mike Ruane of Revelation Software once again took the podium for closing remarks. He thanked the attendees and guests for coming, and announced that Revelation was introducing a Product Showcase, where products written in OpenInsight could be submitted via the web and included in a catalog, available in print and on the web.

Prizes were given away for the best hats from the prior evening’s festivities, and were won by Dave Harmacek, Jim Butler, and Karlyn Bunting. Prizes for Dancing Skill were given to Martyn Phillips, Beth Curratto, and Bob Fernandes. At each attendee’s seat were the conference proceedings CD, which also contained an upgrade for the 7.1 beta release of OpenInsight, and a Revelation poster. As the attendees left the hall they were each given commemorative shirts celebrating the conference. 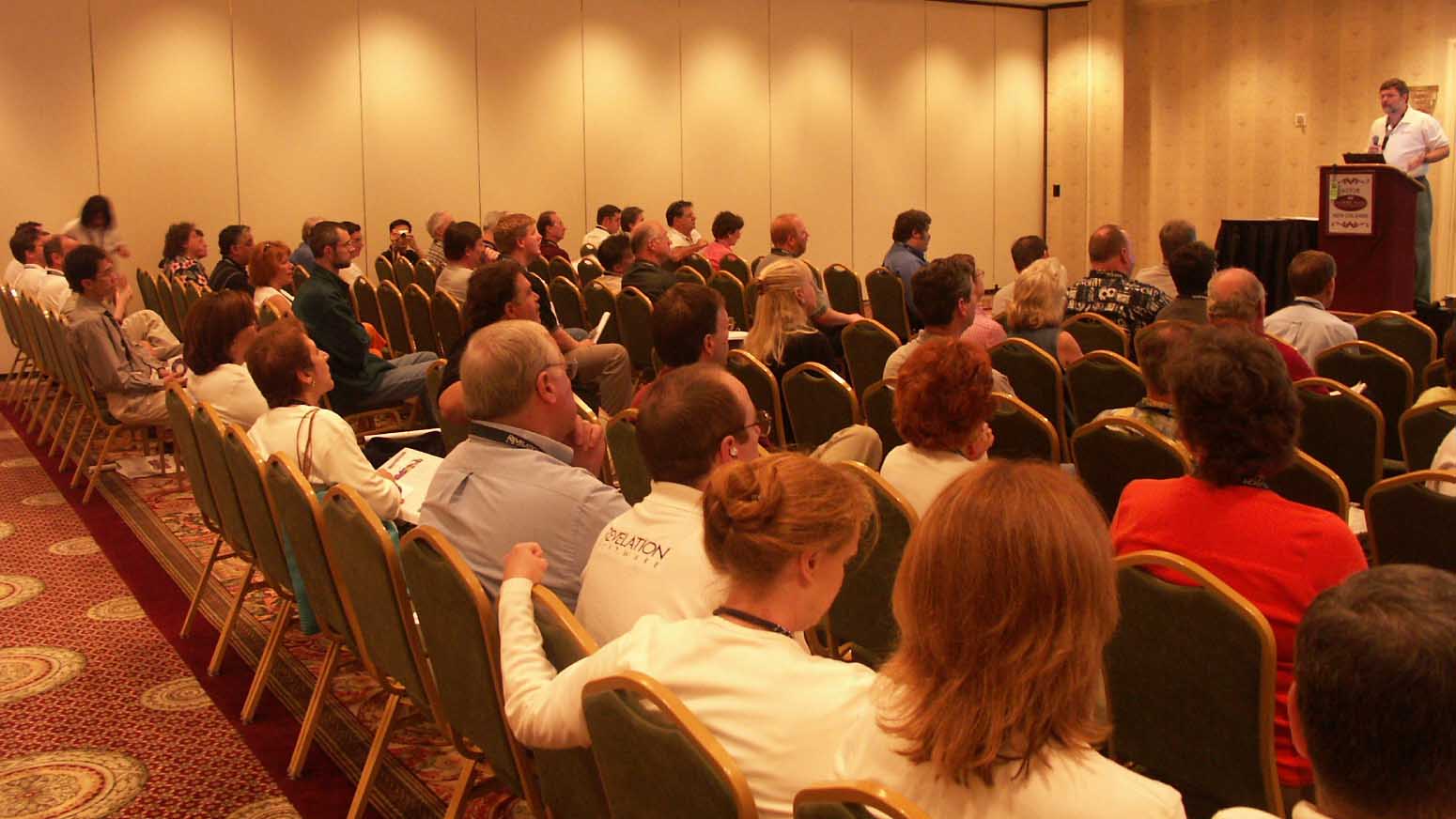 The conference was a fantastic success. Presenters and their sessions were reviewed by the attendees and averaged a score of 4.3 out of a possible 5.0. The attendees also had the following comments about the conference in general:

“"We had a great conference and the demographic was superb. Plenty of developer peers to excite with our newer technologies and plenty of users to chat to about requirements. The presentations were superb and we were able to use several of them as training for our newer members of staff. The vendor fair in particular gave us the opportunity to showcase our enterprise tools with so many leads that we're going to be kept busy for the next few weeks just following up! Revelation had obviously learnt from last year's conference and those areas that needed attention were very specifically addressed. We were particularly taken by the professionalism of the MC introductions. Nancy Ruane deserves special mention for ensuring the event ran like clockwork. And whilst it wasn't the main purpose of being there I'd be lying if I didn't admit that the party rocked! We'll be in Vegas next year for sure!", Andrew McAuley, Sprezzatura Group

Don Bakke, President of SRP Computer Solutions, had the following to say. “While we expected a great conference, we didn’t anticipate that it would exceed the 2002 conference in so many ways…Second, many cheers for the continued advancements in OpenInsight. Every year I am amazed at how unwilling you and the company are to simply stand still. There is now a level of excitement and imagination within the Revelation community that is greater than anything I have witnessed before. You have restored the old formula: Innovative and Flexible Tools + Enthusiastic and Creative Developers = Incredible Products.”

“I had a great time, and it seemed that most everyone else did as well” said Mike Ruane of Revelation Software. “It all went smoothly, the presentations were interesting and informative, and both users and developers seemed to profit from it. There were some neat products being demonstrated at the Vendor Fair, and the hotel and city were great places. I’m really looking forward to the show in Las Vegas next year.”

Other comments from attendees included “This conference really illustrates the openness and how far OI has come”, “Not had so much fun since Las Vegas 2002”, “Thanks for all the hard work, I really enjoyed the conference”, and similar type comments.

In fact next year’s conference has already been planned. Taking place during May 3rd through the 6th, 2005, at the Circus Circus Hotel and Casino in Las Vegas Nevada, it promises to be bigger and better than this years. Mark your calendar now, clear it with your boss, and we’ll see you in eleven month’s time. Keep watching the website, www.RevelationConference.com, for information and updates. If you’d like to be an exhibitor, a speaker, or sponsor some event at the conference, please send you information via email to Nancy Ruane at This email address is being protected from spambots. You need JavaScript enabled to view it..