As most of you will probably know, “commuter module” is the term given to a stored procedure whose main purpose is to handle event processing for a specific form.  Rather than have each individual event processed in a separate event script, quick-events are used instead to call the commuter module directly, passing it various parameters such as the name of the object firing the event, the name of the event itself, and any relevant arguments.  The commuter module then branches off to different internal subroutines to handle the event.

While using a commuter module like this is the recommended way of developing applications in OpenInsight, there has never been any sort of formal link between the commuter module and the form itself, which means that it is usually necessary to adopt a naming convention for this approach to work. 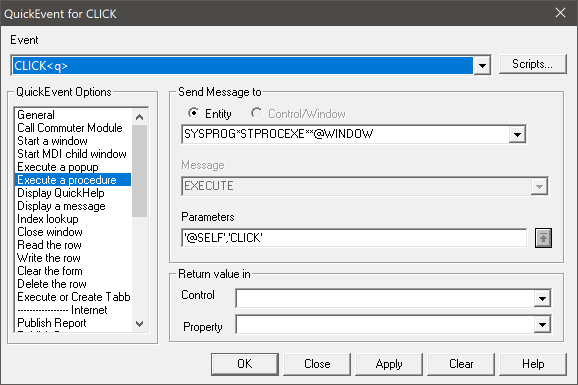 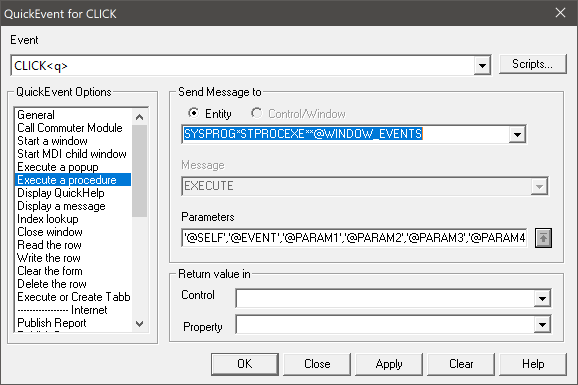 Of course, even with this approach the form still wasn’t actually linked to it’s commuter module, rather it was only linked to “OBJ_CALL_EVENTS” or a fictitious entity called “@WINDOW”.

In version 10 we’ve added a new WINDOW property called COMMUTERMODULE, which simply contains the name of the stored procedure to use (this can be any valid name – you are no longer limited to one based on the name of the form, though we do suggest you keep this convention to help organize your application):

When the form is saved and compiled this stored procedure is linked to the form with a “used-by” relationship, thereby making deployment easier as you will see the link when you create your RDK definition records.

Another benefit of this is that you can quickly open your commuter module from the form by using the “View Commuter Module” button on the Form Designer toolbar:

Finally you can easily set your quick events to call your commuter module in the Event Designer like so:

Note that it uses an “@COMMUTER” placeholder – this is replaced with the contents of the COMMUTERMODULE property at runtime.

(You can still use the previous @WINDOW/_EVENTS or Obj_Call_Events methods if you wish – those options still exist.)

So, this is the first step in tightening the relationship between a form and it’s commuter module.  There is certainly scope for more integration between the two and this is something that we hope to pursue during subsequent releases.

(Disclaimer: This article is based on preliminary information and may be subject to change in the final release version of OpenInsight 10)